Four Days of Undying: DAY FOUR -- THIS IS IT! 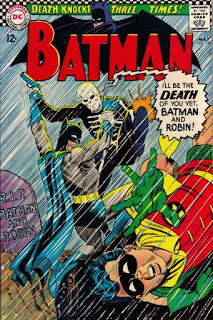 This is the LAST DAY TO GET 25% OFF YOUR FIRST MYTHOARD SUBSCRIPTION. (Use the code AGEOFUNDYING.) So here I am. Talking about The Age of Undying for the final time (before it's released).

As I have mentioned all week, the only way to get The Age of Undying in print is via a Mythoard subscription, so you should get on that. But I'm not here today to badger you into buying something you don't want. If you do want it, great! If you don't, then that's on you. You're the one who will have to pretend to smile when your players ask for a more vicious and nightmarish world that will test their characters. Or when they see their friends fighting corpse colossi and wonder why they never get to have such fun. Or die so gloriously.

But what I am here for today is to answer questions from the fans! From the readers. The askers. The whomevers. Here we go!

Julan Bernick asks, "What Silver Age supervillain would be most at home in The Age of Undying?"

The answer is...Lord Death Man! Created by Robert Kanigher and Shelly Moldoff, but more famously used in Jiro Kuwata's bat-manga from the 1960s, Lord Death Man is the perfect villain for The Age of Undying for multiple reasons. (1) He wears a costume that makes him look like a skeleton, which is really the only reason you need. (2) He fights Batman IN A GRAVEYARD! Fabulously Undying! and (3) He has died MORE THAN ONCE. In America and Japan! I think you should bring Lord Death Man into your game. Just a straight-up port. No changes needed!

Reader Chris Stenger asks, "How many pages is it? Will the other content in the Mythoard box be for DCC?"

The Age of Undying is 24 pages (2 of which are kind of useless, though the table of contents looks darn pretty and the legal jargon at the back must be fun for someone to read)...so 22 pages of good stuff! I tried to make it shorter, denser, but Matt Hildebrand, layout-master-supreme, was smart enough to give it some room to breathe. It's probably a bit more user-friendly than the Bizarre Tales book I put out last year (I'm using that one with a 5e group right now and though I'm having fun throwing things from Baulder at the PCs, I regret the font size and big paragraphs about 35% of the time), and though the first draft was more narrative in its approach, the final version is structured around the 10 principles I mentioned in my blog post the other day. So it's like having 10 chapters in 22 pages, which keeps everything quick and tight and easy to reference at the table.

The demigods at Mount Mythoard say that there will be a one-page mini-adventure set in The Age of Undying to going along with the digest-sized book, and there will certainly be plenty of other goodness in the February box (they always try to stuff about $40-50 worth of stuff in there), but no DCC-specific books outside of this one. For now.

David A. Powers comes in like a displacer beast, fast and furious, with a series of lightning round questions to finish up our Four Days of Undying...

(1) Does The Age of Undying change something about death for the PCs? Do people still die?
Yes and yes!

When a PC hits zero hp, they do NOT die. But there are other ways to kill PCs...and monsters...and everything in between. And once the body is destroyed, then things get even more dangerous!

(2) Do new opportunities for profit and pleasure await in the Age of Undying -- or is it one vast nightmare?
Possibly, though that is left in the hands of the judge! In my campaign, it was pretty nightmarish, but maybe your PCs will follow the path of the stitchermen and begin assembling an army of deadboys to find new avenues to exploit. Still...kind of a nightmare.

(3) Does this book lend itself to a mix-and-match modular toolkit approach?
Absolutely! You can adopt all 10 principles or ignore 8 of them and use your favorite 2. It even tosses in some ideas for how to get in...and out...of The Age of Undying, and you can customize that to fit your campaign world. Or, maybe you use all 10 principles for a one-shot that's all hacking and slashing and decapitations and desperation.

And maybe Lord Death Man rises from the grave. And you ain't no Bruce Wayne.

The Age of Undying is only available via Mythoard and subscriptions are 25% off until February 10th for new subscribers. Use code AGEOFUNDYING at the checkout. Go to Mythoard HERE!


Posted by Timothy Callahan at 1:00 AM