What did we learn?

1. My daughter learned that Michael Curtis is a pretty great writer-of-adventures and runner-of-games. After playing in one of his sessions in which she was transported and transformed (the Michael Curtis way), she later said to me, "no offense, but that was the best game I've ever played in." None taken! Michael Curtis is good and his DCC adventures are one of the things that has hooked me into the system!

2. My son learned that playing a Druid is terrible. Like almost every time. Which is why there will never be a Druid class in my Crawljammer games. Unless it's like a crazy Plutonian Druid who can harvest bones and decaying metal for use in his rituals. Okay, maybe then.

3. We all played a bunch of DCC (via Crawljammer and that previously-mentioned Michael Curtis concoction) and a bunch of Astonishing Swordsmen & Sorcerers of Hyperborea (via my "Blade of Karnus" game and a session run by the great Jeff Talanian). I think those are my two favorite RPG systems because while they certainly share many similarities -- strong roots in D&D and the OGL -- they complement each other nicely. DCC can be really bombastic and insane and dynamic while AS&SH is most often brooding and violent and terrifying. Laser swords are not out of place in either, but they have different tonalities. I love playing both, but I love playing BOTH, you know?

4. I learned that Tim Kask is lying when he says, "I will assume your character is better at his role than you are, so you don't have to tell me every little thing he does when he's in a room." Because later he will say, "you didn't look before walking in the room and so you get whacked for 2d10 damage by this thing that hit you because you didn't say you looked." So...look. He only had to hand-wave magical berries to cure me from my death twice. Before the inevitable total party kill.

5. My two Crawljammer playtest adventures -- Red Planet Rendezvous and the Space Pirates from Beyond the Grave -- both need a little tweaking, but they played well, and in both cases the party was able to complete the objective (ahem, sort of, ahem, that 8d20 Scorching Ray vaporizing the MacGuffin on Mars, ahem) and have a fun time doing so. I need to tighten up a few of the transitions between the episodic encounter locations in Space Pirates, and I need to add a bit more weirdness to the first half of Red Planet, but they are in pretty good shape after a good kicking of the tires this weekend. Look for those adventures in upcoming issues of Crawljammer!
Posted by Timothy Callahan at 5:36 PM No comments:

I will be at TotalCon in Mansfield, MA this week, playing in a bunch of games and running a few, including two CRAWLJAMMER games, using my fancy Judge's Screen that I jacked up with Erol Otus and David Trampier artwork.

In all my sage-like wisdom, what do I, master of the Crawljammin', slide into the Judge's side of this screen? Nothing! It will actually have my random encounters and some maps for an Astonishing Swordsmen & Sorcerers of Hyperborea game I'm running on Friday. I can't condense DCC into anything that I'd find useful on the back side of the screen. I'll just use it in my Crawljammer games to hide the awesome new maps I drew (for inclusion in future issues of the zine, of course), and to make secret notes about which player characters are most likely to fall into the tenacious maw of some Martian beastie!

So, if you're at TotalCon, I will see you there! I believe there are still slots left in my Thursday game (3:00 PM) entitled RED PLANET RENDEZVOUS. See if you can join us!

If you're not at TotalCon, you should go next year. So we can hang out and talk about Edmond Hamilton comics and Captain Future novels or eat hamburgers or all of the above.
Posted by Timothy Callahan at 5:50 PM No comments:

Email ThisBlogThis!Share to TwitterShare to FacebookShare to Pinterest
Labels: totalcon 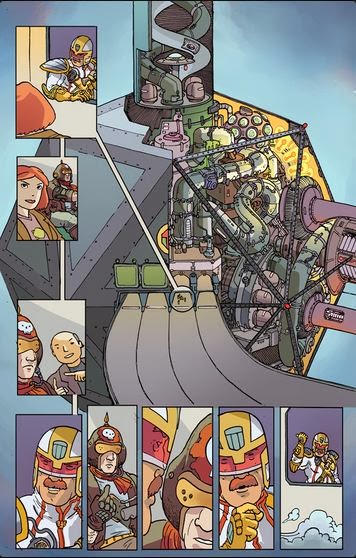 I imagine this is what the space patrol heading out to clean up the dregs of Pluto might look like, in an alternate reality Crawljammer where the space patrol wasn't wiped out before they left Earth by horrible demons and apocalyptic monstrosities from beneath the surface of the world. This is Ulises Farinas drawing a recent (upcoming?) issue of that Judge Dredd miniseres that Douglas Wolk is writing circa sometime in 2014.
Posted by Timothy Callahan at 6:00 AM No comments: 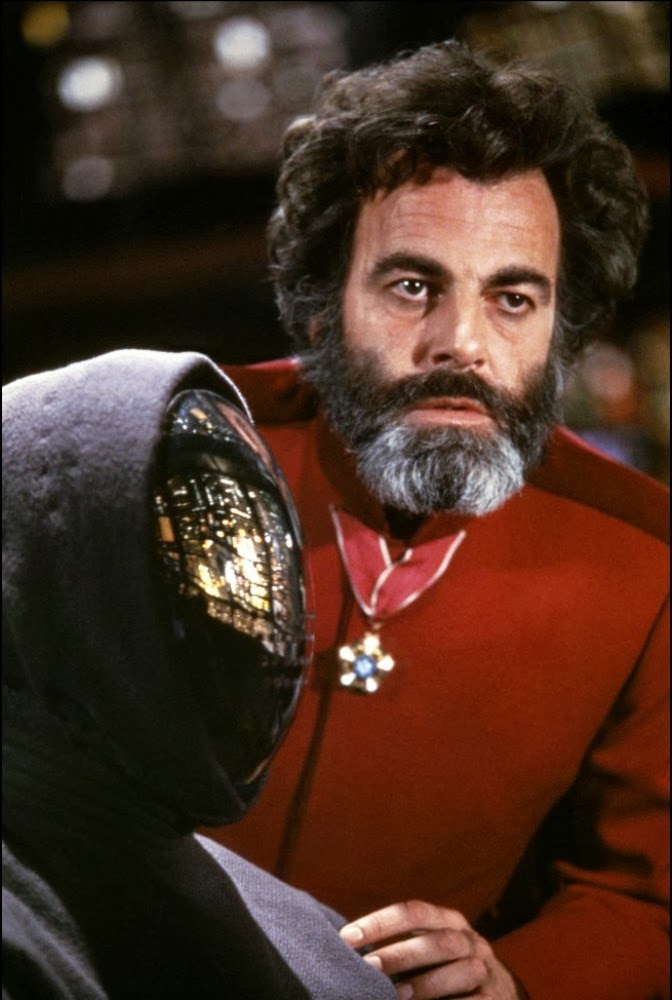 If this isn't fodder for your Crawljammer spaceship-adrift adventures, then that's fine. But you're playing it wrong! Embrace the Black Hole! The devil lives inside.
Posted by Timothy Callahan at 6:00 AM 1 comment: 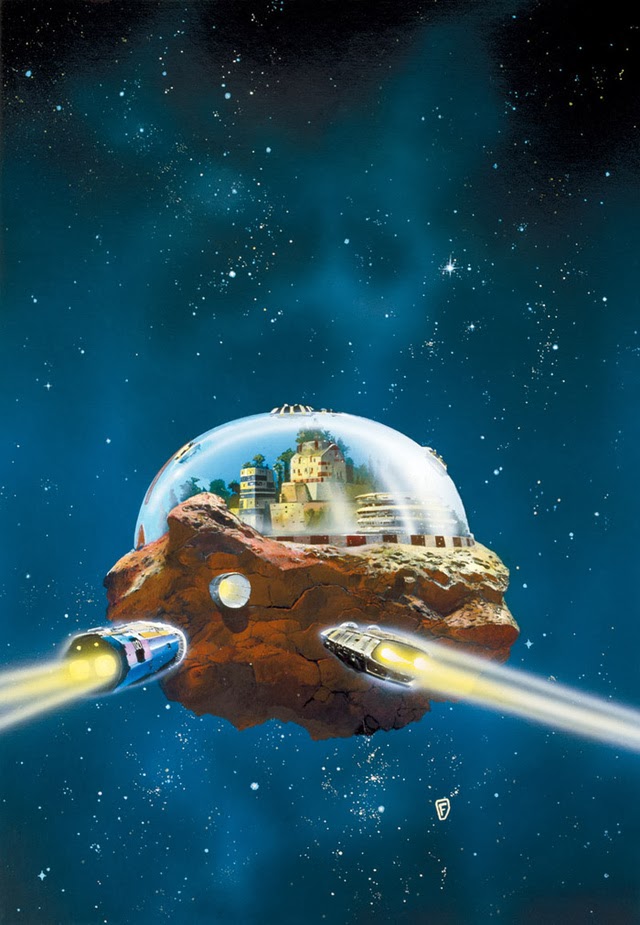 It's Chris Foss. If you don't know his stuff, you should dive in. If this were a Crawljammer asteroid outpost, I wouldn't actually recommend that those ships decide to visit. You don't even want to know what hatches out of that giant rock. Actually, you probably do. And so do I!

It also strikes me that this image is like the future version of the Gold Key Star Trek cover from yesterday. Like some bereaucrat along the way declared, "we need to put a lid on the wackiness!"
Posted by Timothy Callahan at 7:00 AM 5 comments: 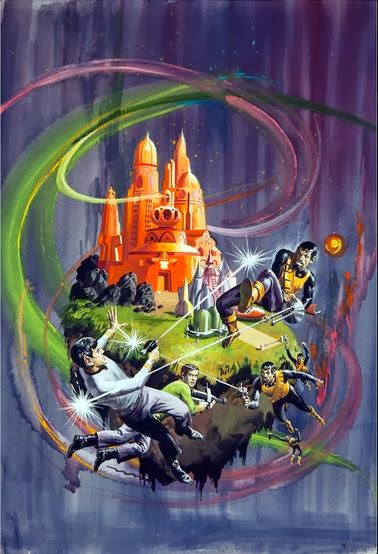 For my money, this is the kind of Star Trek that is better than the Star Trek I can watch on Netflix right now (From Star Trek #15, 1972). And, it looks like they're playing by Crawljammer space rules. Just float around and blast stuff!
Posted by Timothy Callahan at 7:00 AM No comments:

The Revenge of Appendix N

There's no doubt that Crawljammer sprung out of my reading of Appendix N classics over the past couple of years (and my talking about those books over at Tor.com with my colleague Mordicai Knode), combined with my discovery that Joseph Goodman had blazed that trail and whipped it into the fantasy frenzy that is the Dungeon Crawl Classics RPG.

That and rereading a lot of Gygax, from the Dungeon Masters Guide to the Dragonsfoot Q&A threads, to Role-Playing Mastery, to The Forgotten Temple of Tharizdun, to his internet-unearthed contributions to ancient fanzines.

But really, issue #1 of Crawljammer is still built on the bedrock of Edgar Rice Burroughs. Well, not bedrock. Spacerock. Shifting spacerock catapulted into another dimension where guys can just hop in a plane and fly to Venus and join the resistance against an oppressive regime. With swords and ray guns and a flash of this-really-happened-and-I'm-not-making-it-up!

That's how I like to think of Crawljammer. Everything you've ever read in every comic book and fantasy novel and sci-fi epic is true. Embrace it. Crawl into its jam. Jam into its crawl. Burroughs-style.
Posted by Timothy Callahan at 4:54 AM 2 comments:

Demand for the first issue of Crawljammer has exceeded my expectations. I printed the first 60 copies in "space age blue" thinking that I'd probably sell a handful in the first week and give a bunch away and then slowly fulfill subscriptions as they drifted in. I mean, other than mentioning it on G+, I haven't even started promoting it yet.

The DCC crowd has jumped on this early bandwagon and after filling the first four days of orders and subscriptions and setting a few copies aside for my upcoming trip to TotalCon, I only have...10 copies of the first printing left!  EDIT: TEN MORE SUBSCRIBERS HAVE SIGNED UP, SO THOSE 10 COPIES ARE NOW GONE.

Looks like I'll have to go back and do another printing. But I do have these last 10 copies of the SPACE AGE BLUE SPECIAL FIRST LIMITED EDITION CRAWLJAMMER remaining, and the next ten people who SUBSCRIBE for six issues will get a first printing.

After that, it's back to the ol' photocopier for the second printing, which will be equally awesome, of course. But with 100% less first-edition-ness.

1) Crawljammer has been approved by Joseph Goodman of Goodman Games which makes it OFFICIALLY COMPATIBLE WITH DUNGEON CRAWL CLASSICS. So I don't have to pretend it's not, because IT TOTALLY IS!

2) Crawljammer will be published bi-monthly, and this first issue clocks in at 32 pages of sweet space dungeon crawling action and adventure. Every issue this year will also be 32 pages. Just as Bobugbubilz intended!

3) The first issue is ready to print and ship within the next few days! Single issues are $3.00 for the print version, and $2.00 for the PDF version (and if you want both the print and the PDF, it's $3.50 total). International shipping will have to be arranged via email, sorry!

4) If you want to subscribe to the full year of six issues, it will be $18.00, and for that price, you will get both the print copies AND the PDFs at a whopping savings of $3.00! I know! There are slim profits to be made, and I will pass that lack of profits along to you! And, once again, international shipping will be more expensive, so that will have to be dealt with on a case-by-case basis.

5) PayPal buttons for buying single issues or subscriptions are over there on the right side of this very blog! Click away and send me money so I can send you the goodness!

6) If you want to contribute something to a future issue and get bountiful rewards (such as one free issue!), please contact me using the info also on blog sidebar!

Yeah! That's right. It has begun! I will be running two CRAWLJAMMER games at TotalCon in Mansfield, MA in a couple of weeks!

Check out the TotalCon website for more info. (My Crawljammer games are listed under the "Role-Playing Games" listing, while my Astonishing Swordsmen & Sorcerers of Hyperborea game is listed under the "Old-School RPG" listing, even though all my games are pretty old-schoolish!) Player Characters will act on behalf of The Perilous League in search of adventure!

I hope to have copies of Crawljammer #1 ready to go by the time of the convention, so if you see me there and want to pick up a copy for three American dollars, let me know!
Posted by Timothy Callahan at 3:14 PM 2 comments: