A few announcements from Crawljammer Central at Moon Dice Games: 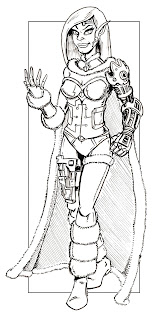 1. The Crawljammer Zine officially ended with issue #6!
I didn't announce this at the time, because I wasn't sure if I would stick to the decision or not, but after releasing six issues of the Crawljammer zine in 2014, I decided that was enough of that particular format. Plus, Staples only has a few different card stock colors to choose from for those covers, you know!

3. The Weird Worm-Ways of Saturn, by Daniel Bishop!
Part 1 of this is ALREADY AVAILABLE. It debuted at Origins and North Texas RPG Con this week! And you can order it over on the right side of this page EDIT: CURRENTLY AVAILABLE IN PDF FORM, AND PRINT COPIES OF ISSUES #1 AND #2 WILL BE AVAILABLE FOR PURCHASE AGAIN ONCE ISSUE #2 IS COMPLETED -- it's the first part of a two-part Daniel Bishop Saturn adventure (with a new character class: the Saturnian Ape-Man). It's amazing, of course, because it's Daniel Bishop. And Fred Dailey rocked the art on the inside, and that Matt Hildebrand cover is eye-scorchingly spectacular. (If you had subscribed though issue 7 or 8 of Crawljammer, this is what you'll be getting instead. I'm sure you will not be disappointed!)

4. More DCC/Crawljammer Stuff Coming!
In addition to part 2 of Daniel Bishop's adventure (the first part was a planetary crawl, and the upcoming part 2 will go down into the depths of Saturn), the plan is to release a few other things I have been writing for Moon Dice Games this year: a supplement for DCC called The Age of Undying, a Crawljammer adventure called The Thrall of the Space Gods, and a print version of what I'll be running at Gen Con -- Dreamscape of the Nightmare Beasts.

5. Plus THIS!
And, most importantly, I have a small cadre of writerly companions working with me to revise and flesh out Crawljammer and the Crawljammer universe and we plan to release a complete Crawljammer handbook/player's guide/whatever-you-want-to-call-it. This will likely be a Kickstarter project sometime later this year or early in 2016. I want to make sure it is written first, before we Kickstart its production costs.

What do you think about all of this??? Crawljammer will live on! For years and years! And more!
Posted by Timothy Callahan at 7:47 AM 10 comments: