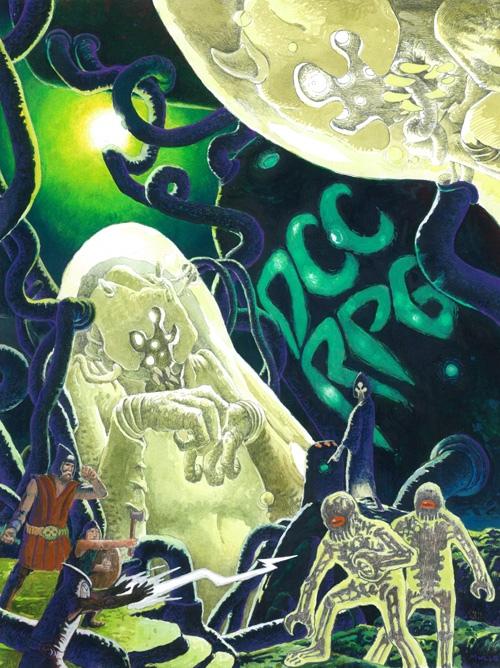 As I mentioned a couple of days ago, I played a LOT of games in 2015. At least 120 board games and role-playing games. It was, by far, the most board gaming I've ever done in one year, and it may be the most role-playing I've done within a calendar year as well. At one point in the fall of 2015, I was running THREE weekly games (Star Wars, DCC, 5e), and playing in ONE bi-weekly game (Rolemaster) and TWO monthly games (Star Frontiers, AD&D).

I also wrote over 50,000 words of RPG material for publication (some of which has come out already, and some is coming in 2016). I was busy! But it was all super-fun.

Anyway, here's where I ended up with my Top 10 Role-Playing Games Played in 2015. I organized it by system, rather than individual experiences, because maybe system does matter!


1. Dungeon Crawl Classics. When I started to write role-playing game material after I stepped away from the world of comics a couple of years ago, I wanted to work for Goodman Games. I was excited to run and play Dungeon Crawl Classics in a way that I had never wanted to run or play anything else. It seemed insane. And alive. And it was. It is. 2015 was a big year for me and Dungeon Crawl Classics. The Purple Planet boxed set finally came out. I wrote Advent of the Avalanche Lords. I contributed to what turned out to be a pretty thick book of madness for the d50. But that's not why DCC is my #1 role-playing game of the year. It's at the top because it was the most fun to run and play in 2015. Whether it was exploring Lankhmar with Michael Curtis, experiencing level 10 characters emerging from rags and nonsense with Marc Bruner, running an improptu session for Catastrophe Island 2 when Doug Kovacs grabbed me at the Embassy Suites and threw me to a table of 10, playtesting the Crawljammer dreamscape of the "Nightmare Beasts" with Fred Dailey sketching away like a courthouse artist, or making up a new subsystem for the "Age of Undying" after the cleric of Cthulhu rewrote the laws of reality, Dungeon Crawl Classic was there. And in NONE of those instances was the game played by the book. It was transformed, tampered with, stretched, expanded, overturned, and molested. It was a great year to play DCC. I suppose any year is.

2. Advanced Dungeons & Dragons. I worship at the church of Gygax and regularly misread the holy book (the 1e Dungeon Masters Guide). Not only did I run a few sessions of 1e, sort of, in my own sacrilegious way, but I played in a fantastic game at TotalCon in which we played Smurfs and Papa Smurf was corrupted by the elder gods. We had to destroy him to save smurfanity. It was great fun. And now I'm in a monthly game in which we are the chosen ones returning to a world gone wrong. Only it's AD&D, so we're not super-competent, and that only makes it better. I love Vancian magic, descending AC, and pole arms.

3. Marvel Superheroes. This is the classic TSR-era FASERIP system. I ran a game at TotalCon that was basically Secret Wars meets Mad Max, months before the new Secret Wars or Mad Max came out. It was so great -- Venom Zombie Galactus was spectacular, though Ant-Man and Dazzler held their own! -- that I started working on an original post-apocalyptic superhero game that should get some playtesting in 2016. But I can't get Marvel Superheroes out of my head. It is the second game I ever loved, after Moldvay D&D. And it is still a thrill to dish out Karma and watch what the players do with their heroes.

4. Metamorphosis Alpha. I played Bullwinkle at a ski lodge on a spaceship. Michael Curtis was the mastermind. It was a highlight of the year. I need to play this system more often.

5. Gamma World. James Carpio ran this using, I think, his memory of 2nd edition rules. It doesn't matter, because it's Gamma World and I got to play Misty Deth who pretended to be related to Steve Jobs and when that didn't work, blew up a whole lot of cyborgs.

6. Astonishing Swordsmen & Sorcerers of Hyperborea. I have an AS&SH adventure coming out in 2016, and I'll be running it at TotalCon this year, but in 2015 I yet again had a chance to play in a Jeff Talanian-run adventure, and he runs games like no one else I play with. I feel like he's the Crypt Keeper, but in his younger years. He's like a semi-sane master of horrific ceremonies. He almost looks serene as your character's life slips away into the void. I need to play this system more!

7. Torchbearer. I played this at GenCon in a game run by the designer, Thor Olavsrud. It's a fancy-looking book, full of what seems to be an excessive amount of rules for every little thing. I knew I wouldn't be able to run it without playing it first, because everything in the rules seemed like they were there for a reason, but they all felt counter-intuitive to me. Playing it, I didn't feel that way at all. It played a lot like the OSR games I have been running and playing, but with a bit more attention to the small details that are often waved away (like exact light sources and carrying capacity of sacks). It ends up making every decision more important, and therefore there are prices to be paid for every misstep. But the game moved along and didn't feel clunky. I like it a lot. Plus I got to play with Sarah Richardson and Mark Malone and they are among my favorite gamers in the world.

8. Rolemaster. Let me tell you about my character. His name is Jarn. He's a level 9 Ranger. He enjoys shooting things in the face and trying (but often failing) to climb out of ditches. He has only lost one arm and one thumb, but herbs have helped them grow back. He summons walls of wood and black bears. I have been playing this one Rolemaster campaign for over 3 years which makes it the longest RPG campaign of my life. Sometimes I want Jarn to meet a nice girl and retire. But the world doesn't want him to be happy.

9. Spirit of 77. I called the one-shot "Amsterdamnation" and the "poster" I created for this Powered by the Apocalypse game at the game day featured a day-glo Bootsy Collins. The PCs were Charles Bronson. Elliot Gould, Jim Brown, and other stars of the 70s. They needed to infiltrate a karate tournament to stop drug trafficking and/or the emergence of the serpent god. In describing this, I realize it should probably rank higher. But I think maybe it's best as a one-shot experience, hidden away where the ghost of Telly Savalas will never find us.

10. Star Wars: Edge of the Empire. I have mixed feelings about this game. I fell in love with it in the fall of 2015. I ran (and continue to run) it weekly. But the problem is that the weekly game is an after-school session and so it's limited to one hour. And this game really doesn't work on one-hour increments. The dice pool requires a bit more room to breathe. More room for creativity and interpretation and for one result to build toward another later result. That can happen, but the one hour time constraint makes it too condensed usually. When I ran a 5 hour session at a local game day, it was a spectacular success. I think once this mini-campaign ends in late January I will set this Fantasy Flight creation away for a little while and run Star Wars-inspired Crawljammer games instead. But there's a lot to like in this system, if you have creative players who can get into its nerve center and live with it a bit without caring at all about "official Star Wars continuity."