Contributor Mark Malone recently posted a "Director's Cut" version of Crawljammer #3's Promethean Lance as a G+ reply, and I asked him if I could share the revised and updated version with our readers and here it is! This one is nastier, because it has its own Crit and Fumble tables! Enjoy! 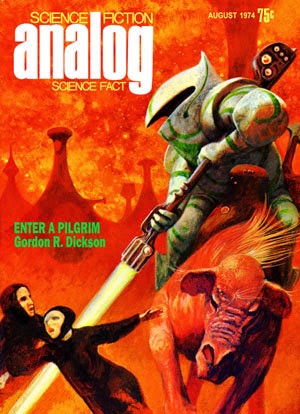 THE PROMETHEAN LANCE OMEGA
Phlogiston is an unstable, extremely volatile energy, an element of pure chaos. While it can be tapped into by Wizards and Technomancers alike, it is impossible to contain, or so it is believed. Legends tell of an ancient order of Techno-Wizards, known as The Illuminates of Prometheus, whose towers lay deep within the nine rings of Ouranos. It is said they were able to harness the phlogiston and develop powerful weapons. One such device, the Promethean Lance, was a weapon of chaotic power treasured by kings immemorial. Armies with these lances became unstoppable, entire races extinguished, kingdoms fell, planets razed, titans slain. While powerful, phlogiston proved to be too unpredictable, and the armies were eventually defeated through attrition. Few Promethean Lances have survived to this age, and the knowledge of its manufacture is lost to time.

Phlogiston check: Each time the lance is discharged a phlogiston check must be made. This check follows the dice chain, with the starting power die (dP) determined by the judge when the item is discovered. The d8 version of the lance was most typical in ages past, but a few have been discovered with full power.

For attack, roll the current dP to determine the power of the blast emanating from the tip of the lance, consult the chart below. If a '1' is rolled, the lance dephlogisticates and drops a level on the dice chain. Rolling a '1' after the power die has dropped to d3, renders the lance inert. There is a 1 in 4 chance the target will catch fire. If successful, the target must make a reflex save DC 10, or spend a round putting out the flame and suffer 1d6 additional points of fire damage.

* The damage column represents the number of times to roll the current power die (dP) for damage. Example: if the power die is d7 and a '3' is rolled, then 2d7 is used for damage calculation.

Overload: On a standard attack, the triggering mechanism releases a controlled amount of phlogiston into the ignition chamber that creates a blast emanating from the lance; however, the operator can override the normal safety mechanisms and release more phlogiston into the chamber to trigger a supercharged blast. It is also possible to overload it by releasing all the phlogiston at once, causing the lance to explode. Promethean knights were known to detonate their lances rather than be taken alive during failed planetary assaults. The player can choose how powerful a blast will discharge, and for every permanent dP expended in this way (the phlogiston is used up, just as a standard discharge) a +1dP will be added to the immediate attack and will trigger an automatic roll on the Critical table. If all the phlogiston is released at once, an explosion centered on the weapon will result in damage affecting an area 6dP' in diameter, and will cause an automatic roll on the Critical table.

Fumble (Use current power die for fumble check):
0 or less: The weapon strays, wildly missing the target.
1 : The lance hums and starts emitting an odd ozone smell, but does not fire this round.
2 : The lance clicks, but doesn't fire, and the operator quickly checks to make sure it is working order. Make a reflex save DC 10 or lose next round.
3 : The sight is knocked askew, suffer a -2 penalty to next attack roll.
4 : Malfunction. Debris is caught up in the barrel of the weapon, it will require 10 minutes to clear.
5 : Dephlogisticate. The lance begins smoking and drops one level for its current dP.
6 : Backfire! The volatile element explodes affecting only the shooter. The shooter takes normal damage.
7 : External phlogiston ignition! Some phlogiston has escaped and ignites around the shooter. Roll 10' area effect damage as normal centered on the shooter.
8+: Phlogiston disturbance!

Phlogiston Disturbance:
See table 4-7 in the Core Rulebook, and substitute shooter and target for "casters", or in case the table roll is the result of explosion, anyone in 6dP' area will be affected. The only exception is entry #6 which should be substituted as follows:
6 : Eldritch energy merge. Eldritch energy interacts with the phlogiston of the lance causing a magnificent explosion centered between the shooter and target. Roll a spell check twice for Fireball using d20 + dP, and use highest result.﻿
Posted by Timothy Callahan at 9:54 AM